Bridgerton is an American streaming television period drama series based on Julia Quinn’s novels set between 1813 to 1827 in the competitive world of Regency-era London, during the season when debutantes are presented in the court.

The Bridgerton first premiered on Netflix on Friday, 25th December 2020. All eight episodes of the show were met with positive reviews.

The show has now become the most popular series on Netflix. Hitting the deal mark of 82 million households check-outs in the first 30 days as to the 63 million estimated and holds the accolade of being the fifth biggest original show of all time.

What is the “Bridgerton” about?

Here’s what we know about the series!

The Bridgerton Series is a collection of eight novels, each featuring one of the eight children of the late Viscount Bridgerton: Anthony(Jonathan Bailey), Benedict (Luke Thompson), Colin(Luke Newton), Daphne(Phoebe Dyvenor), Eloise (Claudia Jessie), Francesca(Ruby Stokes), Gregory(Will Tilston), and Hyacinth(Florence Hunt) in particular focus on their love affairs and domestic drama. 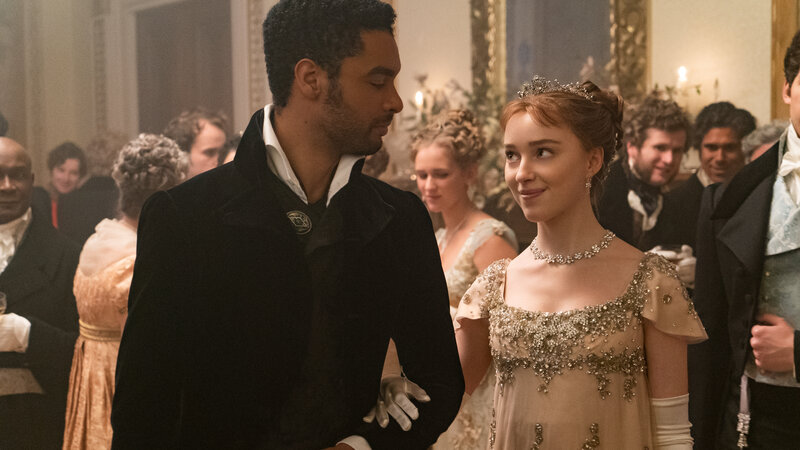 The first season follows Daphne Bridgerton, the fourth of eight siblings in her close-knit family making a debut into society. Despite being liked by everybody around her for her kindness, wit, and beauty, initially fails to attract any proposals. To make herself more pronounced among desirable suitors, she approaches her future ‘fake’ love interest, the cold yet dashing Simon Basset(Rege Jean), Duke of Hastings, who consents to a mutual agreement to deter the mamas who parade their daughters before him and thus begins a bogus courtship.

In addition, to quote Julia Quinn, “I didn’t originally set out to write an eight-book series; at first, it was just going to be a trilogy! But readers really took to the Bridgertons (and to the mysterious Lady Whistledown (Julie Andrews) whose gossip columns “narrated” the first four books), and I found myself rather enamored with the family, too.”

So do not wait for the right time, pick up the Series and stream the first season of the Bridgerton now!

Will there be a Season 2?

Netflix has just confirmed that there will definitely be a Season 2 of Bridgerton! For more information about the latest season, stay tuned.

Here’s a little teaser dropped at the end of January.

Where and How can I stream “Bridgerton”?

You can stream endless shows, including Season 1 of “Bridgerton” with a month-long subscription of your choice only on Netflix.