While the world has no shortage of talents, multi-faceted talents are a rarer breed. But singer and fashion designer Radmila Lolly makes it all seem like a child’s play. The Russian-American artist, who has captured the industry with her music and fashion skills, is all set to release her most ambitious project yet – DIVA.

Radmila Lolly grew up in Moscow in a close-knit family. Growing up, she used to listen to the melodies of her mother and her brother playing guitar. These influences sparked her first interest in music. As the family moved around a lot, Radmila had exposure to a wide variety of musical genres. Still, her favorite was the opera – something she believed she wasn’t good enough for. Yet, fate had other plans for her. At the age of 16, she gave her first public performance in London. This was the beginning of a successful musical journey.

Bolstered by the reception, Radmila continued practicing music. Even when she moved to San Diego and New York at the age of 19, she sought the best professional vocal coaches to train her. She also took lessons for musical instruments like the violin, guitar, piano, and many others. A lifetime of practice and hard work was soon to pay off for her.

In 2015, Radmila Lolly entered the music industry with three singles, including “Black Star” and “Hope”. In 2016, she made her debut with the album “IV Stories at the Standard Hotel”. The album drew praise from music critics and landed her in the spotlight. The same year, she presented her album at the prestigious Carnegie Hall in New York, alongside the avant-garde string quartet “Scorchio”. Even as the world was still absorbing her musical genius, Radmilla followed her debut album with the single “When I’m With You”. Radmila Lolly had arrived at the scene, but few knew how high she was destined to climb.

In 2018, Radmilla released her second album titled “Wonderland”. Like the first one, she also presented her new album at Carnegie Hall. This time, however, Radmila decided to tie her fashion talents with the musical one by releasing a couture fashion collection based on the theme of the album. But it was in 2019 that Radmila Lolly truly gained the reputation she deserved. Her duet “U R Moving Me” cracked into the Billboards Dance Top 25 chart, reaching the #21 spot. Later that year, she followed it up with “Tonight” which reached the #40 spot in no time. The song would have climbed higher but Billboard decided to freeze the charts as COVID-19 struck in early 2020. But Radmila continued climbing the success ladder. She made her film debut by composing the soundtrack of “Honor Up”, produced by Kanye West. 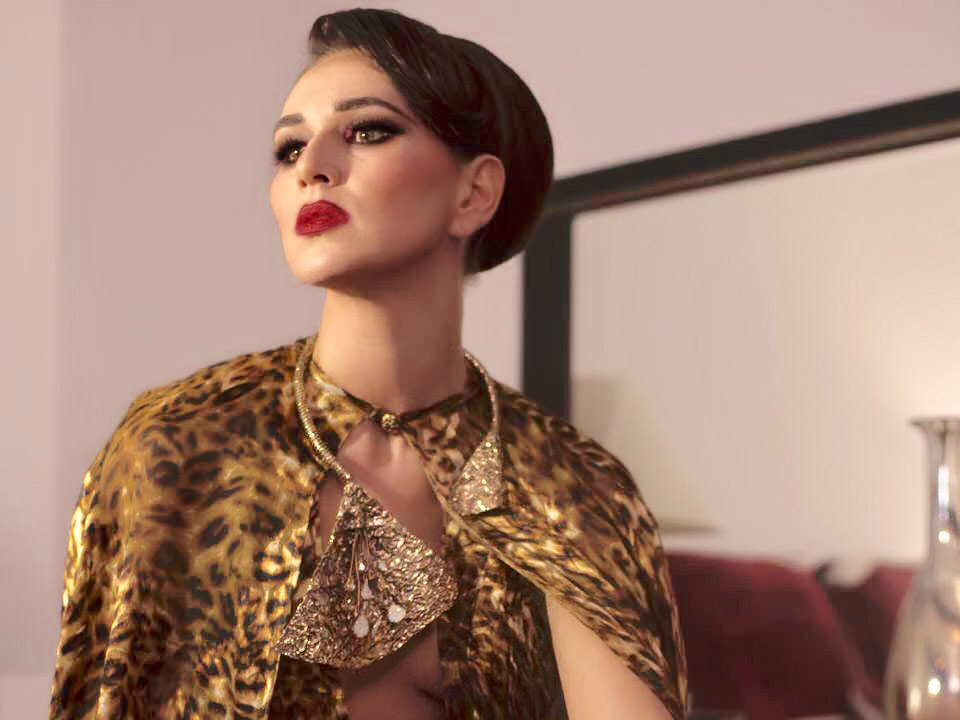 Music is not the only ace up Radmila’s sleeve. Even as a child, Radmila was fascinated by her mother’s paintings. With a mix of imitation and inspiration, she soon taught herself sketching. Her grandfather was a seamstress and taught the skill to a young Radmila. Thus, Radmila Lolly learned the right tools to turn her imagination into tangible designs. But she had no plans to become a fashion designer – until destiny made her move.

Radmila Lolly always created her own dresses and gowns for any event – be it live performances or award shows. Soon, she started getting compliments and requests for her fashion style from celebrities. Ultimately, Radmila decided to diversify her portfolio and realize this hidden talent of hers. Thus, “Radmila Lolly” – her couture fashion brand – was born.

Over the years, her fashion sense has graced the wardrobe of many celebrities – including Bebe Rexha, Gayle King, Mya, and Nicole Ari Parker. Her debut fashion range was featured at the Gotham Hall in New York. Since then, she has been the fashion designer for many high-profile events like Oscars, Grammys, and Daytime Emmys. Fashion magazines like Elle and Harper’s Bazaar have featured her elegant designs.

Radmila Lolly’s most ambitious project is yet to come. DIVA has been a novel in the works for over 6 years. Ever since she started working on the idea, Radmila always wanted the novel to be presented as a musical performance. Her initial plans were to collaborate with someone else to produce the music, but now she has taken the reins into her own hands.

DIVA will be a 27-movement programmatic project, entirely composed by Radmila herself. The project’s music is designed to perfectly express the novel’s story. In addition, DIVA will be accompanied by a couture fashion line designed by her. Radmila also has plans to release an audiobook and a short film with the same title. It won’t be unfair to say that the young artist is capturing every art medium to express the creativity of her project. DIVA is scheduled to release in November this year.

Peter Coissy Gets Candid On Career, Future and DJ Khaled